Not so Canadian, eh? Competition Bureau raps Moose Knuckles for false and misleading advertising to the tune of $4 million

By Jennifer McKenzie and Catherine Lovrics

Canada’s Competition Bureau has taken action against Moose International, Inc., the makers of the Moose Knuckles brand of premium winter parkas, priced between $595 to over $1000. The Bureau’s application (LINK) before the Competition Tribunal seeks $4 million in administrative monetary penalties and restitution for consumers for false or misleading “Made in Canada” representations.

The Bureau alleges that although the parkas are marketed as “Made in Canada”, they are imported from Vietnam and elsewhere in Asia in a nearly finished form comprised of materials (textiles, down and fur) sourced from outside Canada, with only finishing touches (trim, zippers, snaps and labels) being added in Canada.  Hangtags for the parkas included the statement “Fox fur trimmed. Down filled”, and the Bureau alleges that positioning the statement above the “Made in Canada” claim implies that these components were sourced from Canada. 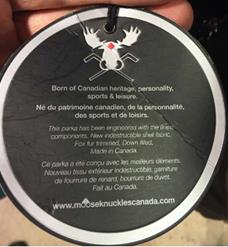 In 2009, the Bureau set guidelines for “Made in Canada” and “Product of Canada” in response to concerns expressed by Canadians over such claims being misleading. A ‘Made in Canada’ claim is unlikely to raise concerns under the false or misleading representations provisions of the Competition Act if: (1) the last substantial transformation of the good occurred in Canada; (2) at least 51% of the total direct costs of producing or manufacturing the good have been incurred in Canada; and (3) the ‘Made in Canada’ representation is accompanied by a qualifying statement, such as "Made in Canada with % Canadian content and % imported content.”  (“Product of Canada” has an even higher threshold.)

The Bureau alleges that the above criteria have not been met: the parkas are not substantially transformed in Canada and the total direct costs to manufacture the parkas in Canada were less than 51%.  Moose Knuckles “finishing” the parkas in Canada does not, in the Bureau’s opinion, constitute a substantial transformation - “prior to the (finishing) work done in Winnipeg, they were parkas, just incomplete parkas”.

The above caution was certainly true of the case here. The Bureau alleges that both text and pictorial representations combine to create the strong general impression the parkas are made in Canada from Canadian materials.  By way of examples, the express “Made in Canada” claim is “reinforced by the use of the red maple leaf on the moose, as well as the hockey player dressed in red with a maple leaf on his jersey”; and the Moose Knuckles website displayed a red maple leaf next to the “Made in Canada” claim at the top of a page advertising the jacket, which would be viewed by a consumer looking to purchase the jackets online. 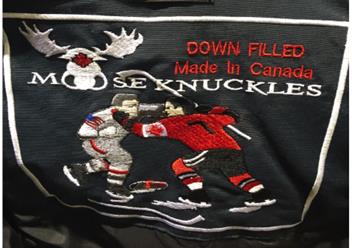 The Bureau notes that in 2009, Moose Knuckles parkas were made entirely at factories in Winnipeg, and in 2012, the company started having its parkas produced overseas. Notably, this is not mentioned as an aggravating factor, and the Bureau contends that the deceptive conduct is aggravated by Moose Knuckles having made the same or similar representations frequently and over an extended period of time. It appears that past manufacturing practices may not be argued to influence how consumers will interpret current claims.

In response to the Bureau’s application, Toronto Star quotes Moose Knuckles CEO as saying “We make some of our parkas in Canada and some in other countries …The coats are clearly marked. One coat would say ‘made-in-Canada’ on the content label if it was made in Canada and another would say ‘made in Vietnam’ if it was made in Vietnam. I believe we are very clear on where our goods are made by putting in a country of origin tags on our coats, and listing them on our website. Many Canadian companies are proud to be Canadian and advertise that fact even if they do not make their goods in Canada.” According to the Globe and Mail, Moose Knuckles contends that “it had on several occasions “pro-actively” contacted the bureau for clarification on its guidelines to ensure compliance”.